A Quick Look at Semaphores in Swift 🚦

First of all, if you’re not familiar with the Grand Central Dispatch (GCD) and Dispatch Queues, please head over this awesome article from AppCoda.

All right! Time to talk about Semaphores!

Let’s imagine a group of writers that must share a single pen. Obviously only one writer can use the pen at any given time.

Now, imagine that those writers are our threads and that the pen is our shared resource (it can be anything: a file, a variable, the right to do something, etc).

How do we make sure that our resource is really mutually exclusive?

Someone may think: well I can just use a resourceIsAvailable Bool and set it to true/false:

The problem is that, on concurrency, there’s no guarantee of knowing which thread, among all, is going to execute the next step, regardless of their priority.

Imagine that we’ve implemented the code above and that we have two threads, threadA and threadB, that would like to use a mutual exclusive resource:

Writing thread-safe code without GCD is not an easy task.

When this resource is only one and can be used only by one thread at any given time, you can think of these request/signal as the resource lock/unlock.

What’s Happening Behind the Scenes

The Semaphore is composed by:

When the semaphore receives a request, it checks if its counter is above zero:

Once the semaphore receives a signal, it checks if its FIFO queue has threads in it:

⚠️️ If you do this in the main thread, the whole app will freeze ⚠️️

Using Semaphores in Swift (with GCD)

Declaring a Semaphore is simple:

The value parameter is the number of threads that can access to the resource as for the semaphore creation.

To request the semaphore’s resource(s), we just call:

Note that the semaphore is not physically giving us anything, the resource has to be in the thread’s scope already, we just use the resource only between our request and release calls.

Once the semaphore gives us its blessing, the thread resumes its normal execution and can consider the resource his to use.

To release the resource we write:

After sending this signal we aren’t allowed to touch the resource anymore, until we request for it again.

Warning: these are Xcode Playgrounds, as Swift Playgrounds don’t support Logging just yet.

In these playgrounds we have two threads, one with slightly higher priority than the other, that print 10 times an emoji and incremental numbers.

As you can Imagine, the higher priority thread finishes first most of the times: 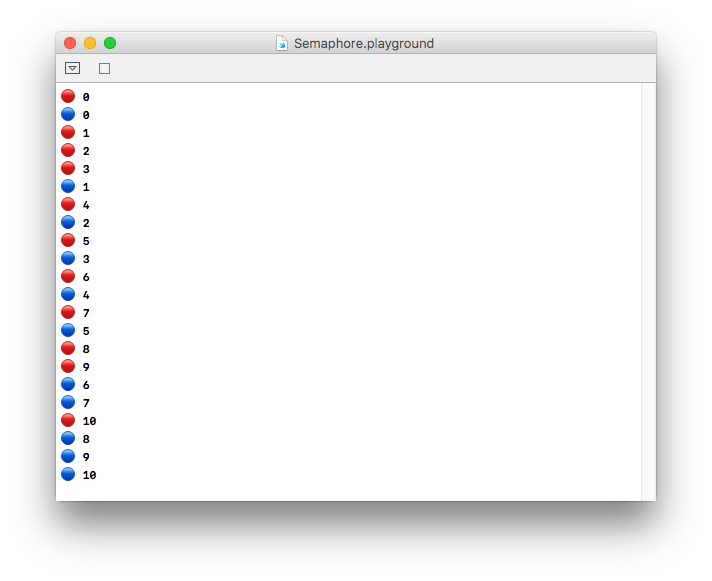 In this case we will use the same code as before, but we will give the right to print the emoji+number* sequence only to one thread at a time.

In order to do so we will define one semaphore and update our asyncPrint function:

I’ve also added a couple more print commands to see the actual state of each thread during our execution. 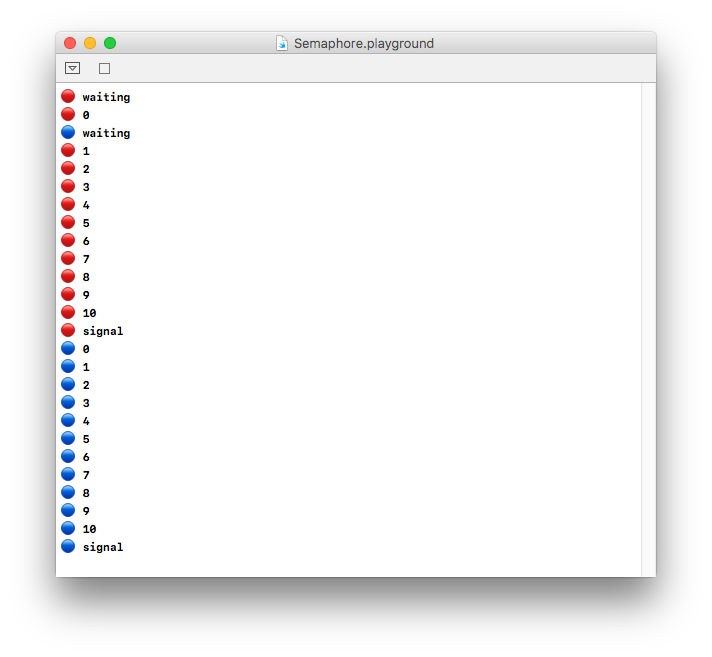 As you can see, when one thread starts printing the sequence, the other thread must wait until the first one ends, then the semaphore will receive the signal from the first thread and then, only then, the second thread can start printing its own sequence.

It doesn’t matter at which point of the sequence the second thread will send the wait() request, it will always have to wait until the other thread is done.

Now that we understand how everything works, please take a look at the following log: 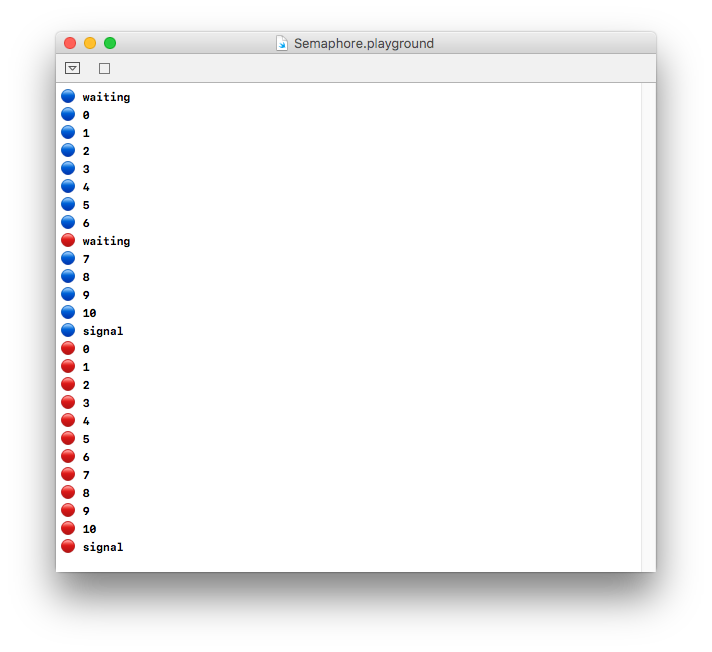 In this case, with the exact code above, the processor has decided to execute the low priority thread first.

In other programming concepts different than the Semaphore, when this happens the low priority thread will temporarily inherit the priority of the highest priority thread that is waiting on him: this is called Priority Inheritance.

With Semaphores this is not the case because, actually, anybody can call the signal() function (not only the thread that is currently using the resource).

In this scenario our high priority thread is being starved of CPU time (hence the concept of Starvation).

In my opinion, it’s better to use Semaphores only among threads of the same priority. If this is not your case, I suggest you to look at other solutions such as Regions and Monitors.

This time we have two threads that use two mutual exclusive resources “A” and “B”.

If the two resources can be used separately, it makes sense to define one semaphore for each resource. If not, one semaphore can manage both.

If we’re lucky, this is what happens: 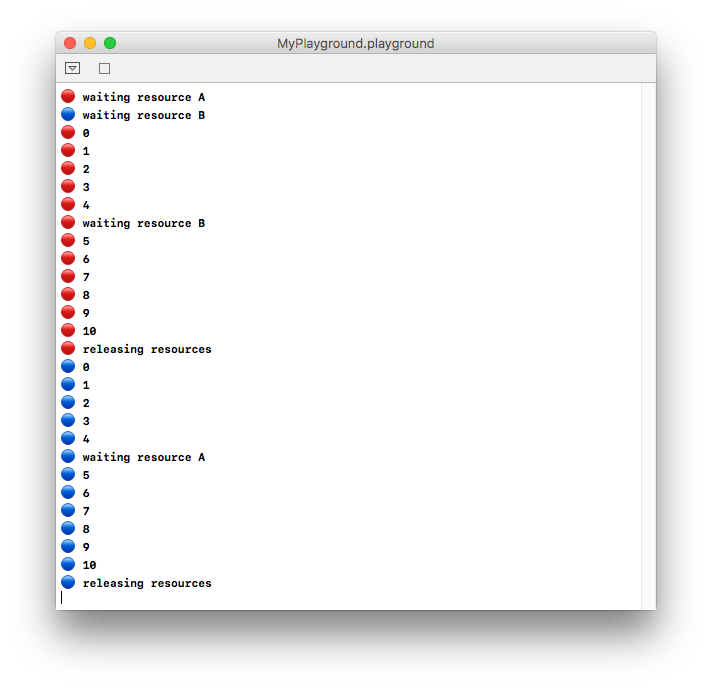 Simply, the high priority thread will be served with the first resource, then the second and only later the processor will move to the low priority thread.

However, if we’re unlucky, this can also happen: 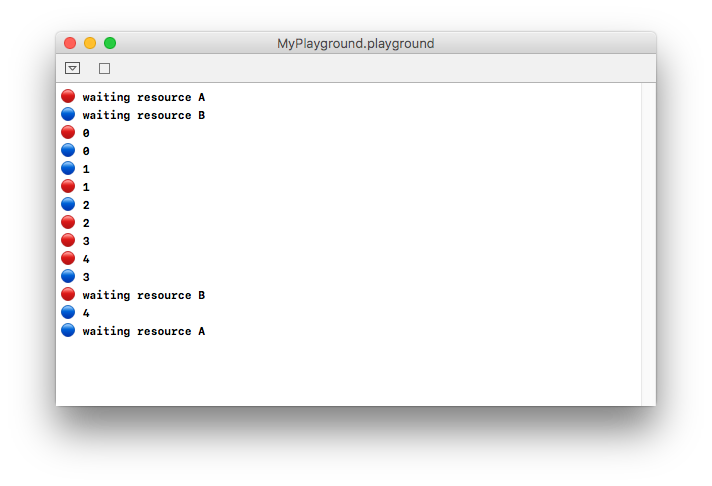 Both threads are waiting on each other with no possibility to move forward: welcome to a Thread Deadlock!

Avoiding deadlocks is not simple. The best solution would be preventing them by writing code that can’t possibly reach this state.

In other OSs, for example, one of the deadlock threads could be killed (in order to release all its resources) with the hope that other threads can continue their execution.

…or you can just use the Ostrich Algorithm 😆.

Semaphores are a little nice concept that can be very handy in many applications. Just, be careful: look both ways before crossing.